THE RAMBLINGS OF A FRENCH CANADIAN WARGAMER

Today we have the iconic Cobra High Speed Sentry (H.I.S.S.) tank. It was quite possibly my favourite vehicle in my youth, it looked super cool and looked futuristic enough to be include in Star Wars adventures too! 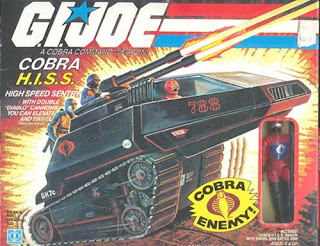 The HISS was developed to fulfill two separate needs on the battle field, anti-personnel and heavy armor. The H.I.S.S. tank is the most versatile and deadly tank in Cobra's armada.

Incredibly, this is the first ever 28mm vehicle I've painted in my life.

The model I used is a bit of a story in itself, as I used a small plastic toy which incredibly is the right scale for 28mm! It's sold as novelty for offices or such, complete with Pew Pew sounds and lights! At 13$ CA, it's an unbelievably good deal!

I remove the wheels, primed it while protecting the plastic canopy with masking tape, and then painted it. The original HISS in the cartoon was black, but I painted mine blue, a favourite of mine which came in toy format many years later. I had a bit of a problem with the painting, as I gave it a wash of blue ink. Bad idea! Ink on such a smooth surface looked horrendous, so I painted over it. So basically I gave the model two basecoats! Other than that I'm pleased with the vehicle, especially the edge highlights. Eventually I'll need to try some of the fancy tehniques like rust and weathering. 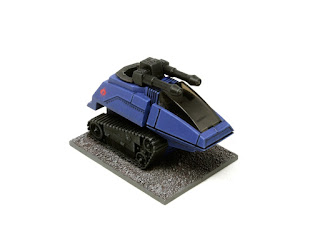 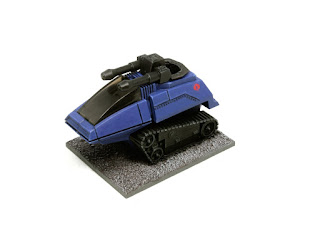 The stickers included are crap so I did not use them, but I did manage to find Cobra decals from Company B! I learned a lot while painting this, and my 2nd HISS will be better, but I'm still happy how it came out, for my very first try at the bigger scale vehicles.
Posted by Iannick at 12:45 PM

My Fantasy/Oldhammer and Sci-Fi blog